Our History
Over 250 years in our community

a tradition of love

As it has for more than two centuries, Trinity continues to be a community of the faithful, reaching out joyfully in Christ’s name to share God’s love and compassion, ministering to one another, our neighbors, and all creation. We pray that the transforming grace of the Holy Spirit will bring new generations to know, love, and serve him. 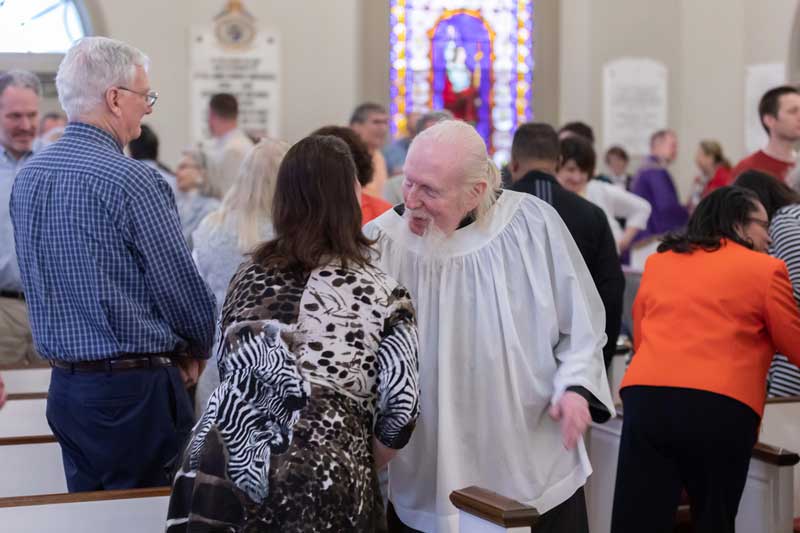 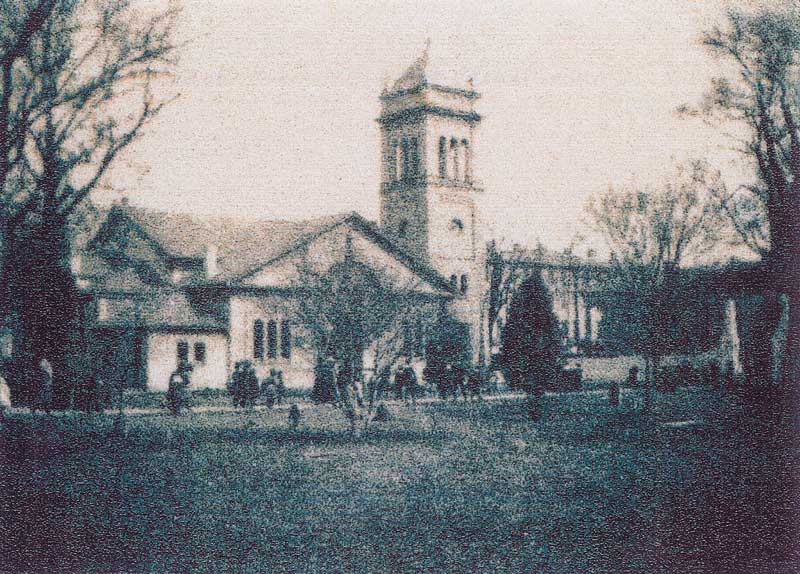 Trinity Church, Portsmouth, 1894
When the founder of Portsmouth laid out the town in 1752, he named one of the blocks “Church Square.” Trinity Church was built on Church Square in 1762. Trinity Church continues as a vibrant Christian witness on Church Square some 250 plus years later. Trinity is a proud part of the Episcopal Diocese of Southern Virginia which is a diocese in The Episcopal Church. We have services every Sunday at 8:00 and 10:30 and communion is open to all baptized Christians. Breakfast is served at 9:00 and Christian Formation, for children and adults, follows at 9:30 during the school year.

Trinity Church was originally just the central rectangle with the barrel vault and clear glass in the windows. Our stained glass windows and expanded worship space were added later. Our historic churchyard is home to the earthly remains of a number of notable individuals. The plaque on the north wall is dedicated to the second rector who left the church during the American Revolution to be chaplain of the Virginia Militia. Several Revolutionary soldiers are buried here including the aide to General Lafayette, Bernard Magneon and Commodore James Barron.

After the Revolutionary war the north wall of the church was rebuilt with granite from the British History 3fortification raised by then Major General Benedict Arnold. Rev. William Andrews was the British rector. The church is mentioned in two Hessian diaries. The bell in the tower was cracked ringing the victory at Yorktown. Veterans of the Quasi War with France and the War with the Barbary Pirates are buried in the yard along with the sea captains who made the port famous. By the door to the vesting area there is an oval marker to the fifth rector of the church, called the “Sporting Parson” who started each sermon: “Do what I preach, not what I do.” 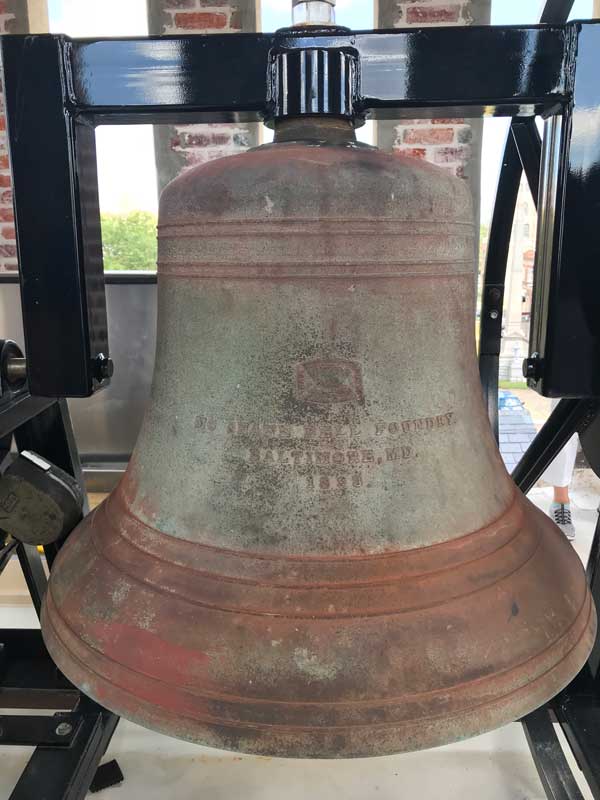 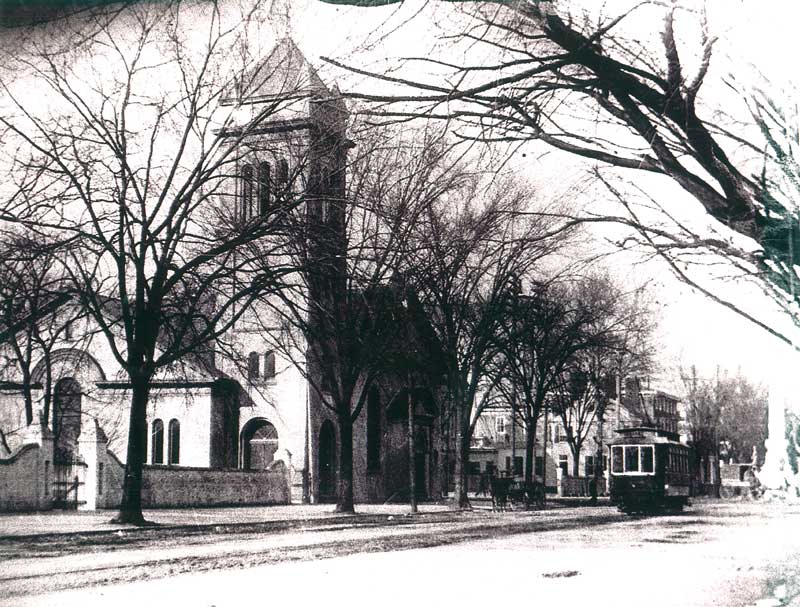 Trinity Church, Portsmouth, 1901
The three windows on the east and northeast from 1859 are by Henry Sharp of New York: the Tiffany of his time. Their “Catholic” imagery demonstrate Trinity’s adherence to the Oxford Movement.

The middle window on the north wall is dedicated to the fourth rector, who was the hero of the Battle of Craney Island–one of the few land battles won by the Americans in the War of 1812. This window was the original entrance to the church and pews were painted black in this portion of the nave for the free and slave African Americans in the congregation. The slave who was a hero of the Yellow Fever epidemic in 1855 was freed and became Verger at this church (a plaque to him is in the tower). There are many memories of the Civil War in the church. The “Confederate Window” commemorates officers who died from this church. It was erected during Union occupation of the town and the inscription, now standing on the sill, was so offensive to the Union officers that the Secretary of the Navy said he would close the Naval Hospital and the Shipyard unless it was removed.

Trinity Church, Portsmouth, 1901
The crew of the C. S. S. Virginia (the ironclad Merrimac) was blessed at this altar and the acting priest, The Rev. History 6John Wingfield, blessed the ship before it went to the first battle of ironclads. Fr. Wingfield’s refusal to pray for the President of the United States resulted in his being forced to sweep the streets in Norfolk with a ball and chain on his leg (he later became the first Bishop of Northern California).

At one point the old box pews were removed and the interior converted to a hospital for wounded African American soldiers in the Union Army. The window by the pulpit picturing St. James the Greater may also be by Henry Sharp, but was executed in the 1870s. The window over the altar is from that same period. The altar is an old gravestone moved when the annex History 7was built in 1892. 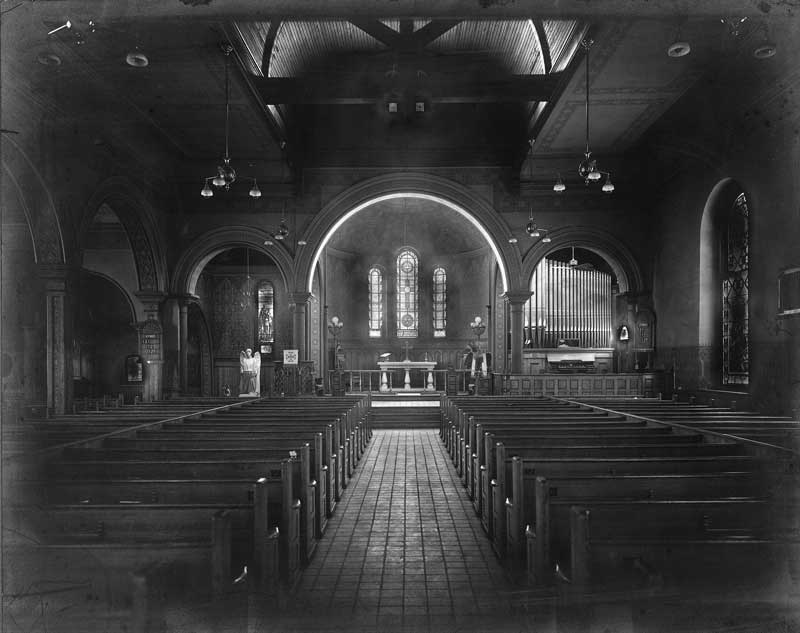 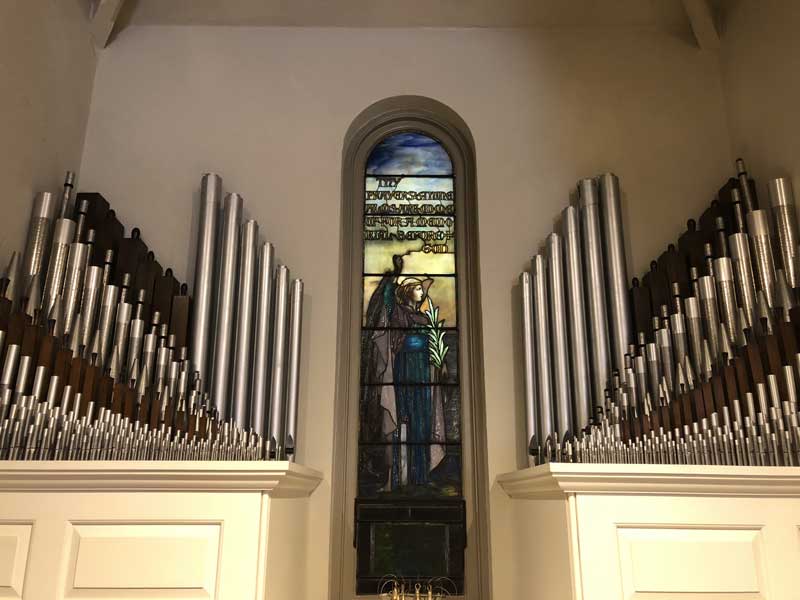 The organ includes new and historic pipes and is the largest in a church in Hampton Roads. Above the organ console is one of six windows in the church by Lewis Comfort Tiffany.

All six of the Tiffany windows are from 1894 and appear on Tiffany’s “pencil list”. He said this one, of the angel appearing to the centurion Cornelius, was among his best. Two little jewel-like Tiffany windows are in the vesting area and the magnificent triptych called “The Resurrection” is by the baptismal font. The original font from 1762 survives in the All Saints Chapel; this one called “Elizabeth” was placed in 1893. Above it is the plaque commemorating the “Bicentennial of the U. S.” with the young girl (The Church of England) giving the Book of Common Prayer to the baby the Episcopal Church in America. When it was placed a Verger’s wand, now mounted beside it, was found in the wall.

The triptych in the back of the church is by White Friars: the most famous glass house in England in the 20th HIstory 9century. Beside it is a gravestone cut in 1800 in London for a sea captain who had lost his wife and children to a fever before he sailed. He himself was lost at sea the next year. The Bible beside it was published in London in 1753 and is dedicated on its title page to this church at its founding in 1762. 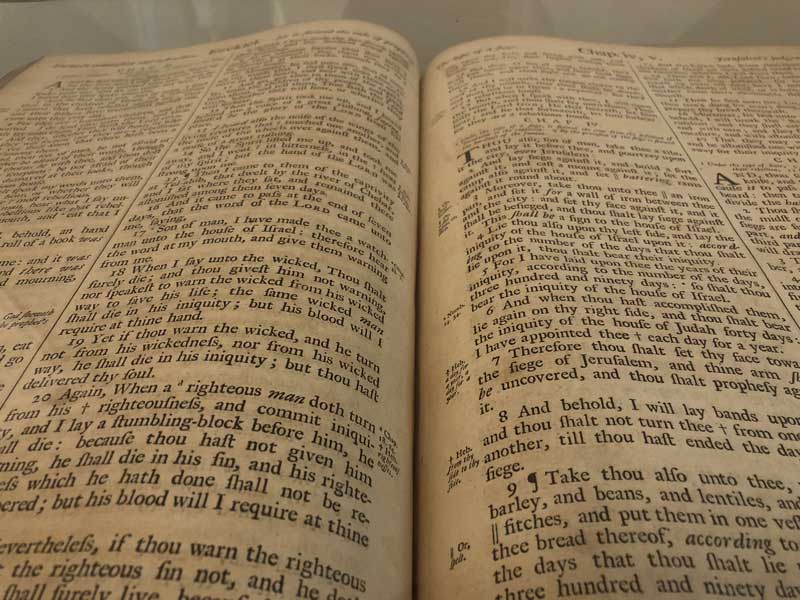 Take a tour and discover centuries of history.

Trinity wished to acknowledge our historian, Dean Burgess, IV for gathering the information on our church’s history. Mr. Burgess is available for tours of the church, schedule permitting. For details, please contact the church office.
Contact Us